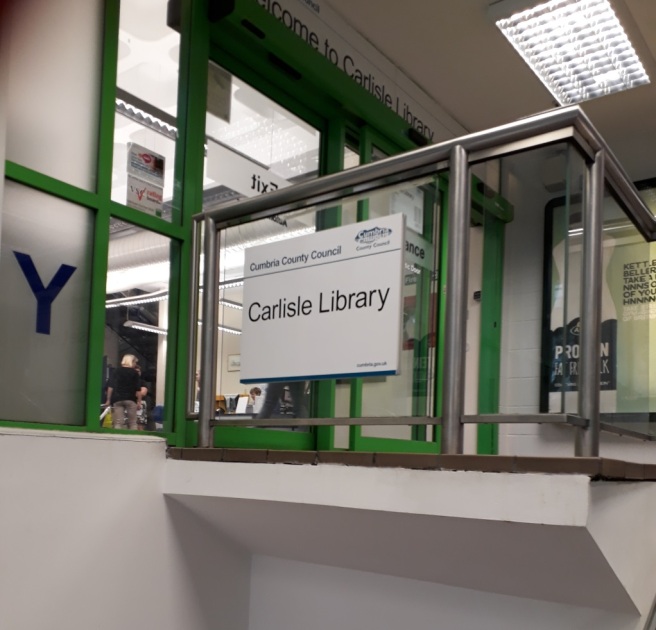 Cumbria Council is another area that doesn’t designate a central library. Cumbria is a large area with many libraries and book drops. Carlisle appeared to be the biggest library and had the local studies facility so that was the one I chose to visit to represent the region. Regardless, this was a wonderful opportunity to visit the Lake District and Carlisle for a few days.

Carlisle Library is housed within – and above – a shopping centre. This always worries me as I am concerned that people may not remember that their local library is still there, as it is above them, but I do see the benefit of people being able to pop in to the library at the same time as going to the shops. I also expect people drop off teenagers and elderly parents who would prefer to sit and read while retail therapy can take place for other members of the family.

The library feels quite modern and yet a bit industrial because of the tubing on display which I assume is for air conditioning. The fiction and children’s library is on the entrance floor (the first floor of the shopping centre) and then the next floor above has reference and local studies material. 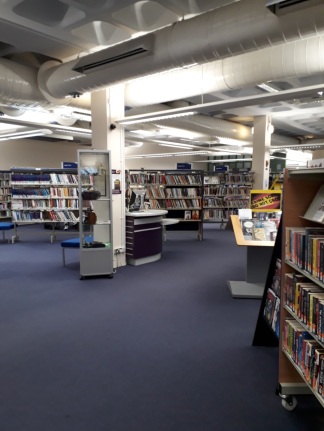 There were comfy tub chairs clustered around windows and study carrels too. I had got to the library just a few minutes after it opened on a May Tuesday and there were already plenty of customers arriving and settling down for some reading or studying.

This was another library that was full of displays – which I like. I hope they are able to change them and mix them up occasionally.

Lancaster Central Library is in the centre of town, off Market Street, in an old building (I haven’t been able to find an exact date for when it was built). It has two entrances and we accidentally entered at the side entrance that has “Public Library Juniors” carved above the door but isn’t where the children’s library is now. The town’s museum is also next door.

Inside there is a really nice curved ceiling over the main area, with decorated windows which looks very tasteful.

In an attempt to dress up the building there are colourful silhouettes on the walls that look really good. They look alive and full of movement. There are also quotes painted on the walls and corridors.

The children’s library is a corner off the main room and had several children reading there. It is decorated with striking large stand-up Roald Dahl books. Plus, there is, of course, the compulsory Elmer rug.

There’s also posters dotted about advertising the code club and lego club. The Friends of Lancaster Libs Twitter feed and website shows that there are bands and events organised in the library regularly. Apparently Lancaster Central Library pioneered the Get it Loud in Libraries where there are music gigs in libraries. The local seed library, which started in 2015, is often based in the library too, which is a fab idea.

Oddly enough the study/meeting pod is rather close to the children’s library but I suppose there wasn’t anywhere else for it to go. Upstairs there is a more quiet area (and appears to be called the Sanctuary). The library also has the local studies material. 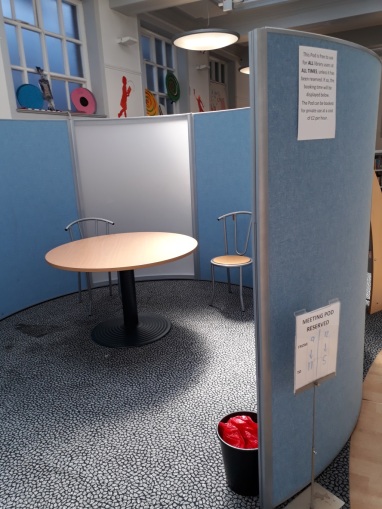 I really love the lampposts outside, that say ‘Library’ on them. I think they look a bit Dickensian – if you ignore the electricity part! 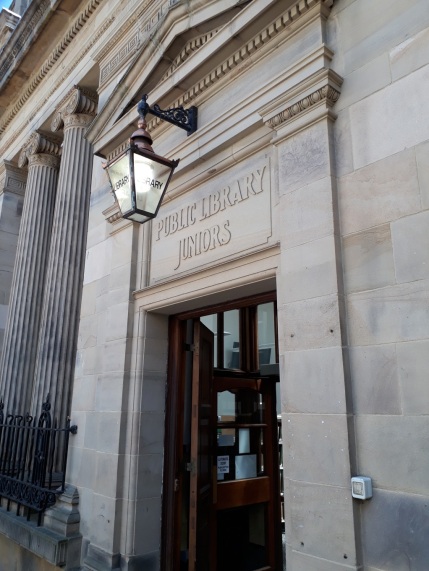