My first visit to another library for two years!

As I was in Windsor for a talk, I managed a visit to Uxbridge Library which, for the purposes of this blog, is representing the libraries for the London Borough of Hillingdon. The library is nestled amongst the shops – I initially walked past.

Large children’s library with an impressive tree structure which has lights hanging down giving the impression of hanging fruit.

Uxbridge Library is a large library on five floors. As well as the large entrance area and children’s library, the ground floor has a wide open space where events can be held. There were some Remembrance Day exhibitions in place but parents and babies were appearing for the regular Tiny Tales (rhymetime and storytime combined for the under 5s), which was nice to see.

The building is quite modern with an atrium letting in light in the middle. There are several computer areas, a lift and toilets. Levels 2 and 3 have fiction, whilst 4 and 5 have non-fiction. A guide is pasted onto the pillars making it easy to find your way around. Everything looked in good condition,e.g. the carpet and bookcases. There were further banners, display cases and exhibitions on other floors.

I have not seen “Playaways” before. I get the impression they are little devices with one audio book loaded so you borrow the entire device. I quite like the idea but, obviously because of my age, it just makes me think of walkmans. 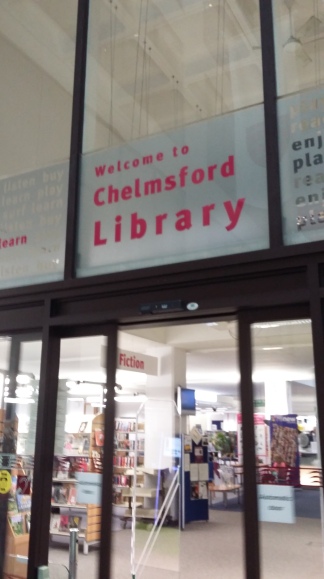 As we approached the Library from the road at the side we could see in through the windows. The Library is slightly underground, almost like a basement but still light and welcoming. As we could see in it made it very inviting. It was incredibly cold outside so when we entered through the sliding doors the warmth was much appreciated.

I really liked the fact that jigsaws and board games like Chess and Connect Four were left on the tables. It sent the message that you can stay a while and be comfortable and that the library is a place to socialise and enjoy yourself.

The children’s area was vast and well stocked. My daughter reliably informs me that the book cases had arches that you could climb under to read your books. There was an empty area at the back which I presume is used for events and storytime which currently had a disco ball in so various children were playing there and calling it the disco area. There was a display on Shakespeare (as it was a week before his 400th birthday). There was a separate young adults section over the other side of the library.

I was very impressed with the two displays of leaflets headed TLC Talk to me, Listen to me, Cuddle me! They recommend titles on particular issues, such as healthy living for children, autism, what to do when someone is in prison:

I saw several members of staff very patiently and expertly training members on the use of IT and the library catalogue. There was also a poster about the library’s Code Club for children to learn computer coding which I am all in favour off.

I particularly liked the big audio books section and the eye-catching book displays.

Another well stocked and spacious library, although not as vast as some of the others I have visited recently. There was plenty of seating (a choice of sofas or desks and chairs), self-issue machines, a couple of photocopiers. Clear signage and helpful staff. No loos in the building but some new public loos just up the street.