Grimsby Central Library was built between 1966 and 1968 and is now operated by Lincs Inspire. The statues on the outside were made by local artist Peter Todd and called the Guardians of Knowledge. They look a bit forbidding to me. Apparently Google Map’s algorithm originally blurred out their faces in order to protect their privacy!

The Library was refurbished in 2013 and reopened in 2014 with its stock being condensed from the original 5 floors into 3. There was an attempt to get the building listed in 2011 and you can read the English Heritage Report.

Fortunately, various original 1960s features were retained such as the entrance foyer terrazzo floor and the hanging light fittings. 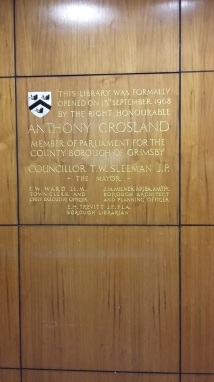 Inside it had a really nice feel. 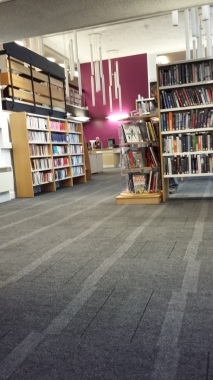 The children’s area was small but had a whole bookcase of Polish children’s literature which I thought was lovely.