West Bromwich Central Library is the central library for Sandwell Council. It is another Carnegie library, opened in 1906 and is incredibly grand both inside and out. There are paintings in the entrance stairwell and fresco paintings on the walls of the library which seem to be depicting scenes from Canterbury Tales. The library’s ceilings are painted in colourful reds and purples, there’s a lot of use of green tiles and some fancy leather chairs. There is a metal spiral staircase (although not in use) and leaded windows. 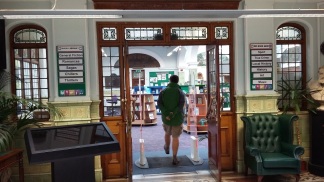 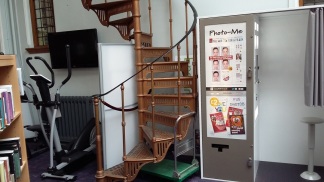 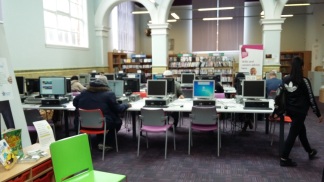 I think this is the first library I’ve seen with fitness equipment in but it may well be there temporarily as part of a fitness campaign. It’s also the first time I’ve noticed a photo booth – very useful. There was a TV on the wall, as I’ve seen in many libraries now, but this was the first time the sound was on! There was a door to a café but that was closed. 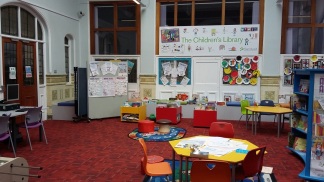 It’s also the first library with a foosball table! Unfortunately we couldn’t play as you had to hand in your library card in order to get the ball and we weren’t members. The librarian tried to encourage us to join – pointing out it’s free – but I explained we weren’t local.