The Central Library is nestled in amongst the shop fronts and is the Central Library and Contact Centre. The ground floor has some fiction and the children’s area but there are three more levels above. It is a bit of a rabbit warren with two sets of stairs.

A very impressive music section. Staff and help points on every floor. The children’s area doesn’t feel large enough for the city’s population. There’s a local studies area and an exhibition area which is a large square room. The exhibition area felt a bit empty at the time but had displays about the First World War round the walls.

Even though it’s a Monday morning on a warm day the desks were packed with readers.

Rudimentary study booths had been created by sticking display boards between the one- person desks that were by the window but they were very popular.

Security guard, lift, self-issue. The signs outside were green but inside there are blue wooden bookcases with red signs. 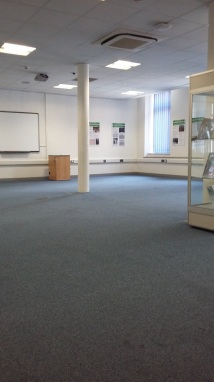 Would benefit from some investment.