The Lord Louis Library is in Newport on the Isle of Wight. It was opened in 1981 and named after Lord Louis Mountbatten, the Queen’s cousin and diplomat, and opened by his wife, Countess Mountbatten of Burma.

The library is in a very central location, beside the bus station and near the shops. I think there is a park and pavilion behind but we visited in torrential rain (typical British summer) so I didn’t try out the greenery.

The central part of the library is an octagonal shape with a mezzanine, with further areas coming off it. However there is not a great deal of room for books on the upper level. They have done their best to dress up the library with colourful signage, artwork on the walls and the children’s library has a huge tree structure. 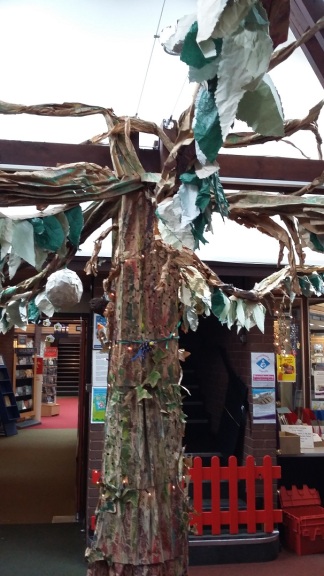 We visited on a weekday and there were several people in the library, reading, researching or just sheltering in from the rain. The staff were happy and helpful but the building is feeling run down and the stock neglected.

The Isle of Wight library service is suffering from budget cuts and recently reorganised closing a couple of libraries and moving the library service headquarters to the Lord Louis Library. Another sign of cuts was the need to put out book crates to catch the rainwater dripping into the library.